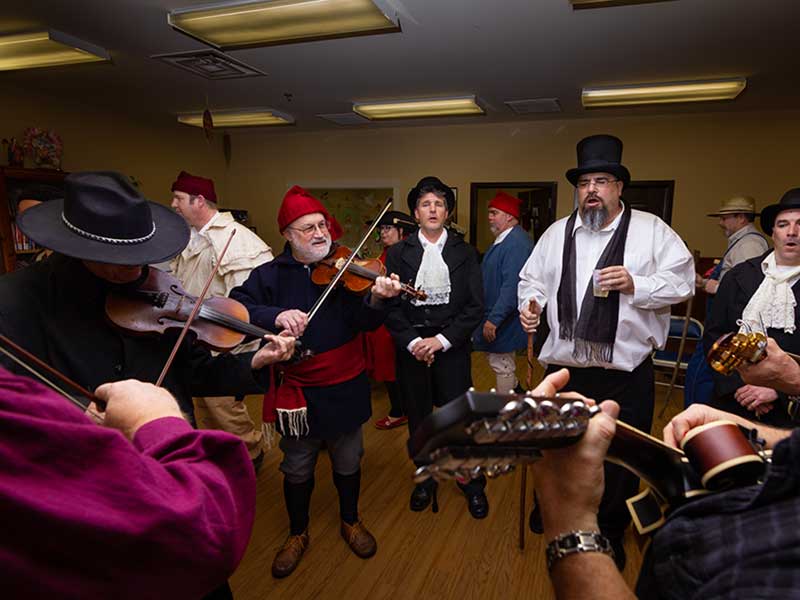 Founded by French merchants and fur traders, Ste. Genevieve remained a French speaking enclave for many years in the newly Americanized Midwest. Sadly, the last generations of native French speakers are disappearing, but cherished traditions like La Guiannée still remain. This ancient tradition, analogous to the English custom of Wassailing that dates back to Europe’s Middle Ages, is celebrated by descendants of those French settlers. You can watch and participate with these singers and musicians as they celebrate this 250 year old tradition each New Year’s Eve in the streets, cafes and pubs of Ste. Genevieve’s Historic District. 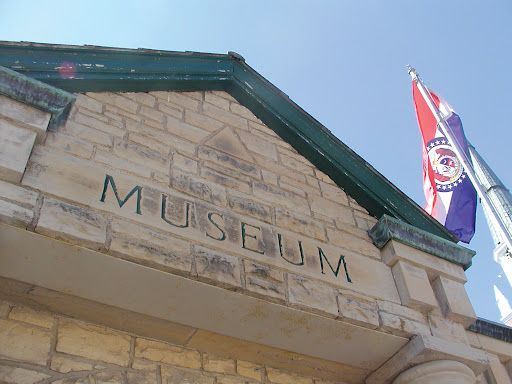 The Sainte Genevieve Art Center features displays on the county’s rich art history and art by local artists. The center is home to the Ste. Genevieve Art Guild and will offer art classes, workshops and other events. Come in and browse the impressive displays!

Comments Off on Ste. Genevieve Art Center and Art Museum 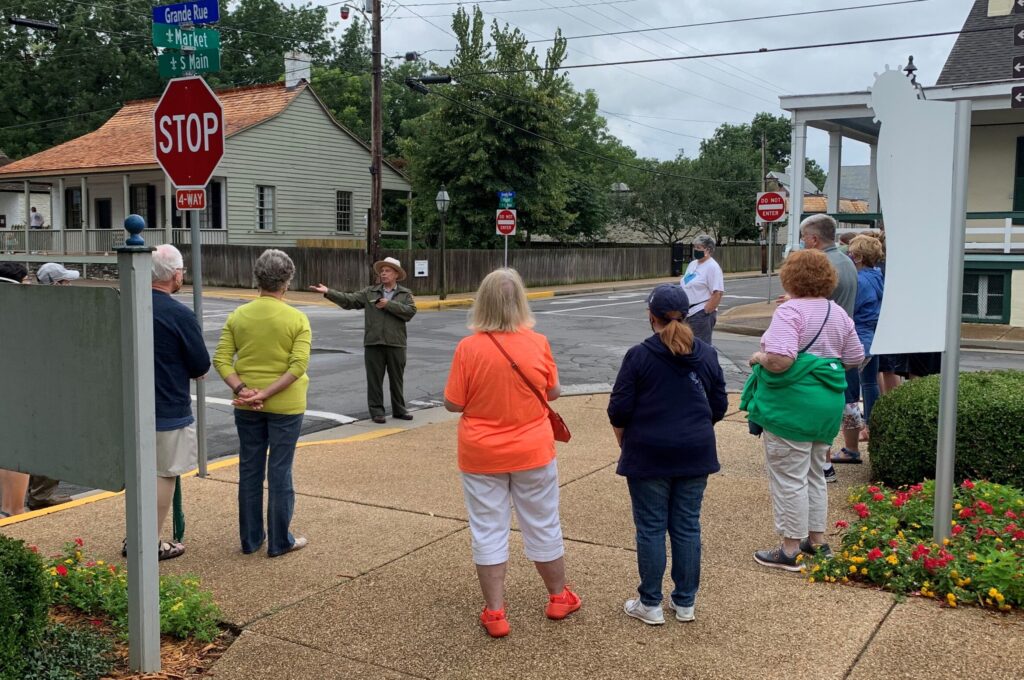 Comments Off on Free Walking Tours in the Historic District 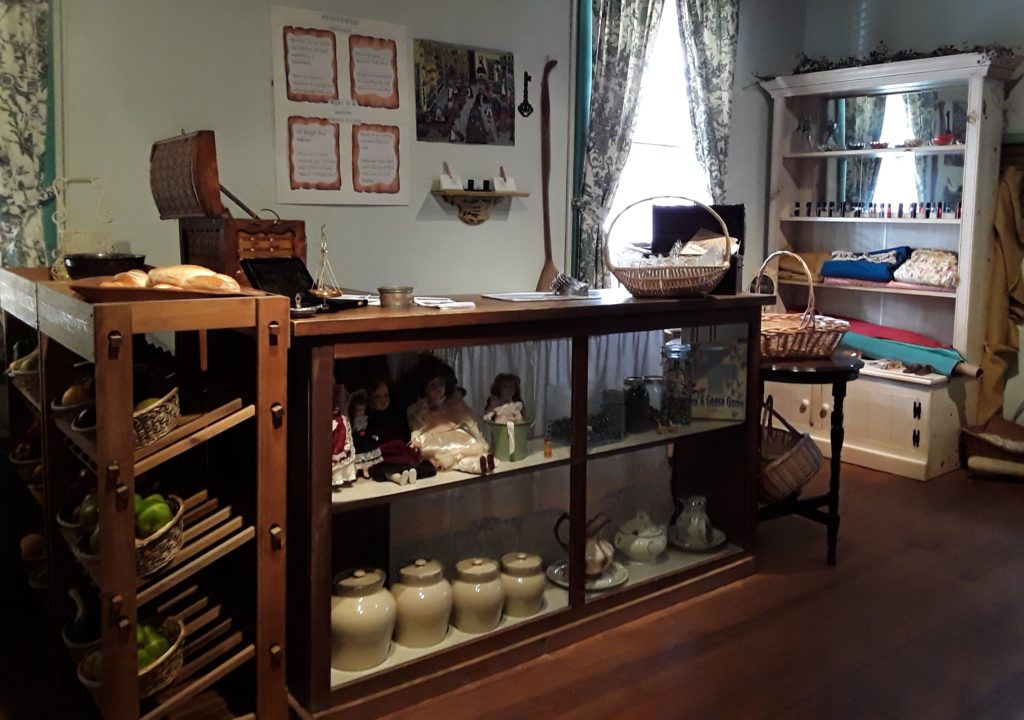 The Linden House features fun and educational French Colonial Activities for kids. Visit and experience colonial crafts and skills by “shopping” in our vintage store, learn about history and language in our 18th century school room, throw a tomahawk* or use a bow and arrow in the yard, and so much more! *Age 8+, close-toed shoes required.
Available by group booking.

Comments Off on Hands-On History at the Linden House 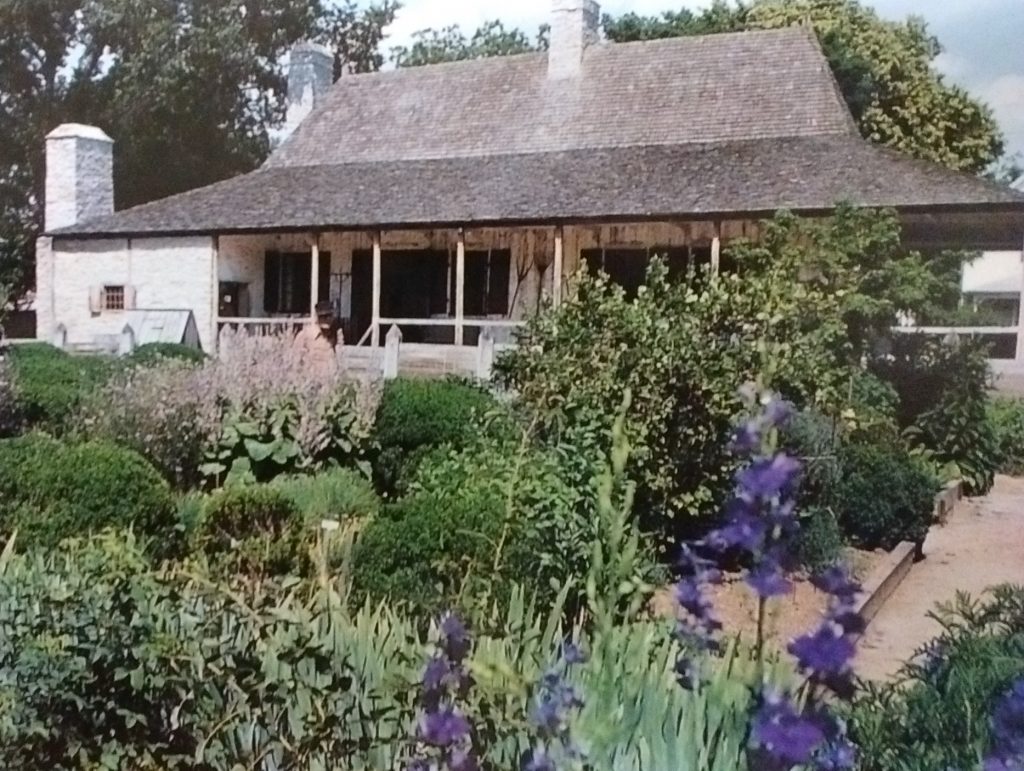 The Bolduc House is a National Historic Landmark and is restored back to the way it was in the 1790s. The Colonial furnishings in this vertical log structure demonstrate how people lived back then. The LeMeilleur House next door illustrates the next generation of house construction and décor. Guided tours are available with an emphasis on French and Spanish culture, influence, and architecture.

Tickets for tours available on the bottom of most hours may be purchased at the campus gift shop inside the Centre for French Colonial Life.

Adult/$10, Student/$5, free to military with I.D. Available to student and adult groups as well. Call to schedule a group tour.

Comments Off on Bolduc & LeMeilleur Houses 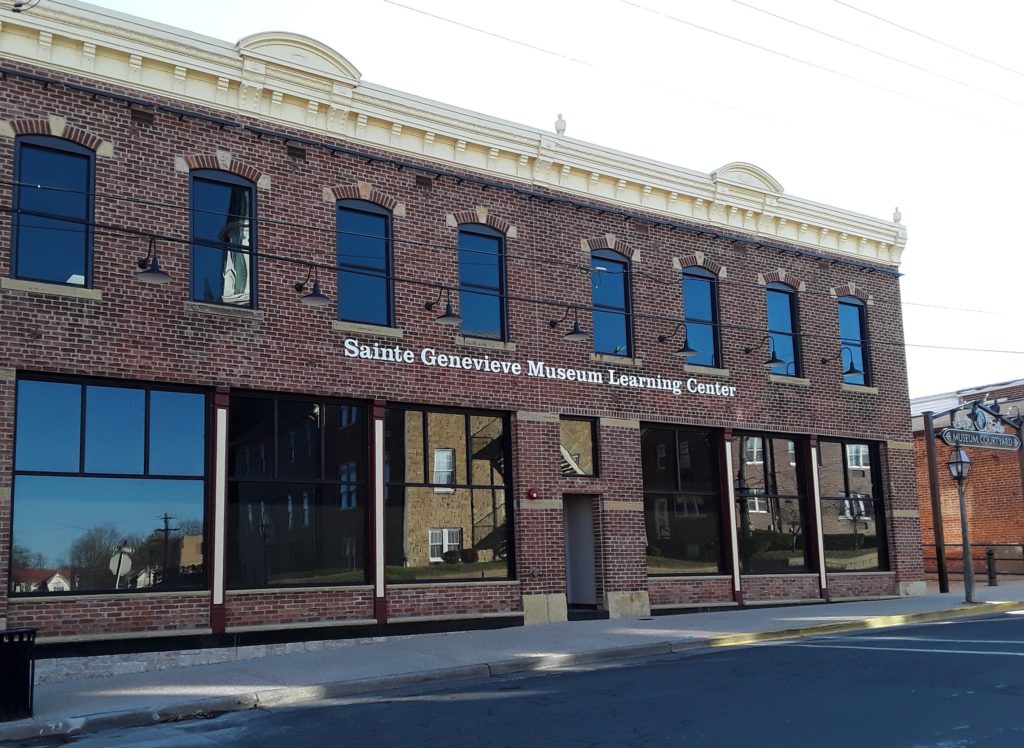 The Sainte Genevieve Museum Learning Center has opened some of its galleries, including some of Guy Darrough’s impressive dinosaur replicas and evidence of the Missouri dinosaur currently being excavated. Additions are being made with galleries focusing on local history. Native American, French, German and mining exhibits will feature unique artifacts from Ste. Genevieve’s past.

Comments Off on The Sainte Genevieve Museum Learning Center 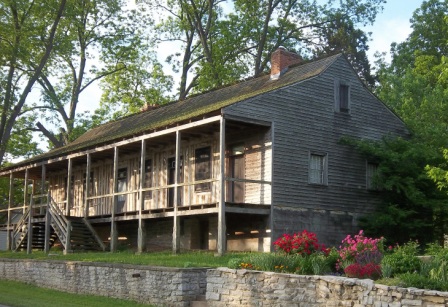 Comments Off on Green Tree Tavern 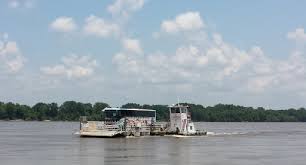 Enjoy a ride across the Mississippi River to Modoc, IL, Fort de Charters, and access to Illinois Highway 3. To reach the ferry go north on Main Street which ends at the ferry landing. Call ahead to make sure it is able to run.

Comments Off on Ste. Genevieve-Modoc Ferry 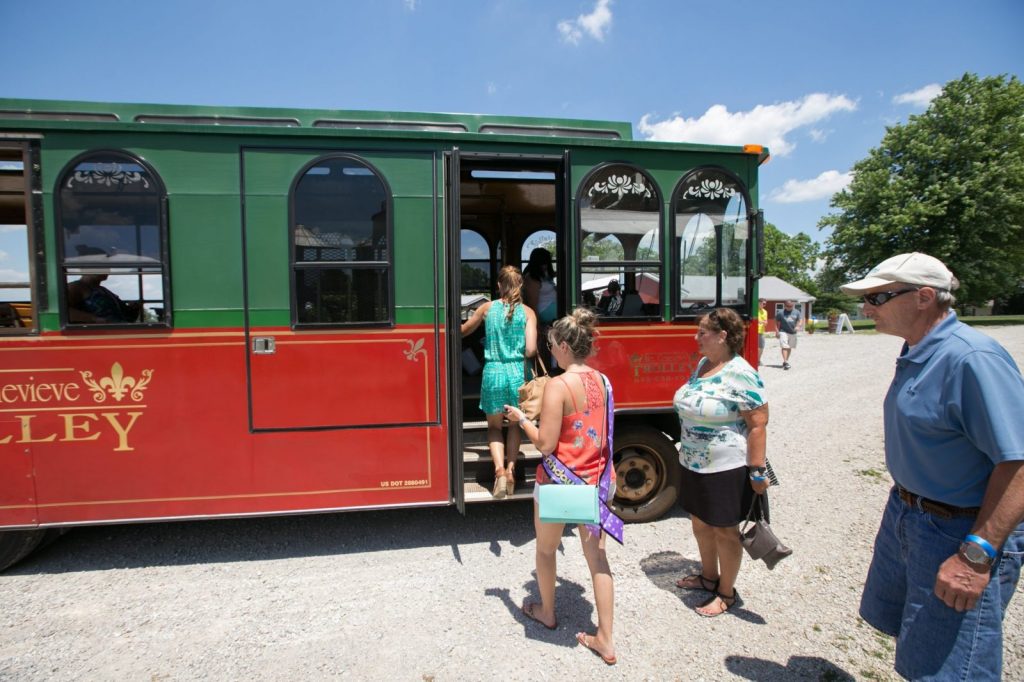 For a $20 fee, riders will receive an all-day ride wristband and will be able to take the trolley from one of the downtown stops to several of the county wineries. Call 573-535-1911 to make arrangements.

Comments Off on Ste. Genevieve Trolley

The spirits will again emerge from the crypts and tombs of historic old Ste. Genevieve’s Memorial Cemetery as the Foundation for Restoration of Ste. Genevieve hosts its annual Déjà vu Spirit Reunion. Visitors will experience Missouri’s oldest town through the spirits of those buried in the town’s Memorial Cemetery. This cemetery, established in 1787, includes the tombs and grave markers of the area’s earliest French pioneers as well as emigrants of German, Scottish and other heritages – slave, free and integrated spouses of black African and Native Americans.

This living history program of stories, traditions and nostalgia highlights the lives and personalities of notables such as U.S. Senator Lewis F. Linn, Felix and Odile Vallé, Marie LaPorte, Joseph Bogy, Ferdinand Rozier (a one-time business partner of John James Audubon). This provides the visitor with an intimate taste of lifestyles and happenings in Missouri’s oldest town during the late 18th and 19th centuries. So tour the cemetery via lantern light and chat “face-to-face” with over 20 spirits clad in traditional dress and enjoy a hauntingly good time.

In addition, all proceeds help to benefit the Foundation for Restoration’s activities and restoration efforts. The FRSG is a non-profit community organization formed to promote the preservation and restoration of Ste. Genevieve’s historic structures and traditions. And in 2007 the FRSG was awarded the distinguished Governor’s Humanities Award for the Déjà vu Spirit Reunion program.

Comments Off on Spirit Reunion in Memorial Cemetery 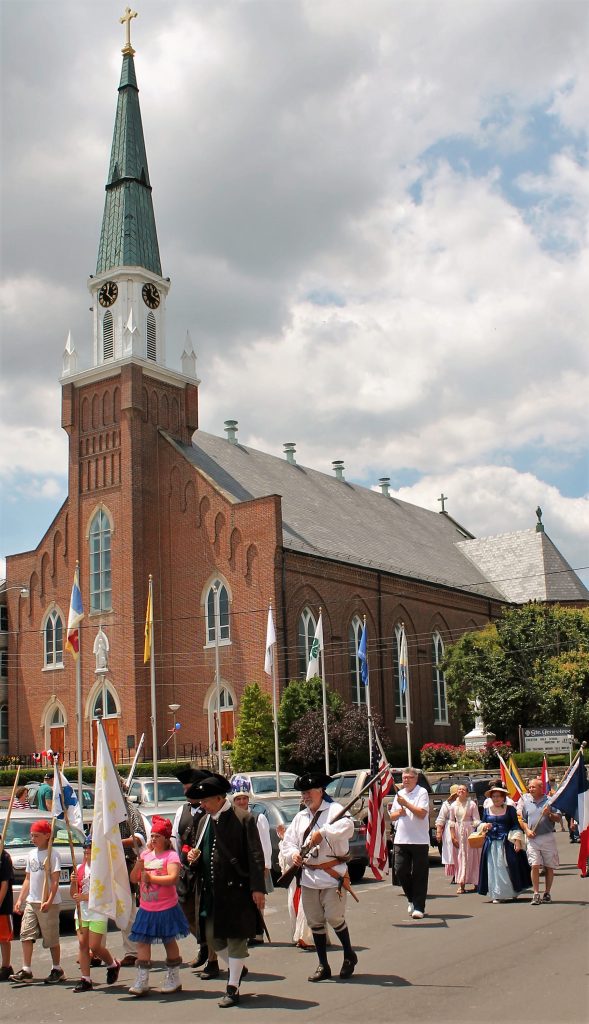 The current, brick Ste. Genevieve Catholic Church is the third Catholic church erected on this block. As Ste. Genevieve was moved to higher ground due to flooding, the original log church was moved here in 1794. A stone structure replacing the log building was consecrated in 1837. As the congregation grew a larger church was required, and a brick building was constructed around the stone one. The stone church continued to be used until the new church was completed in 1880. Then the remaining old stones were removed out the doors. In 1911 this church was expanded again with the addition of the altar apse and the two side transepts. Come inside to admire the stain glass windows and marble adornments! 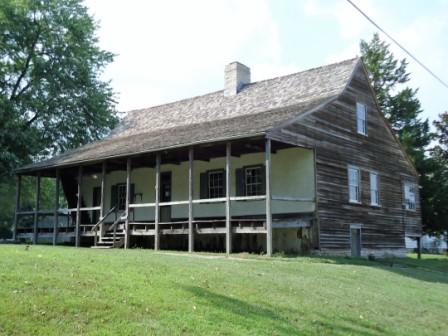 Built around 1792 by Jean-Baptiste St. Gemme Beauvais, the Beauvais-Amoureux Historic House overlooks Ste. Genevieve’s communal agricultural fields, le Grand Champ. Its upright cedar log walls are set directly into the earth in the rare poteaux-en-terre method of construction. Heavy, hand-hewn timbers form the Norman truss system which supports the steeply-pitched roof that is reminiscent of early French Canadian architecture. This vertical log home was purchased by Benjamin Amoureux in 1852 and later inherited by his wife Pelagie. Visit Pelagie Amoureux to hear her story. This house is now part of the National Park Service. Tour a display explaining how vertical log buildings were constructed and a large, impressive diorama depicting the village of Ste. Genevieve as it was in 1832! Free. Open seasonally.

Comments Off on Beauvais-Amoureux House 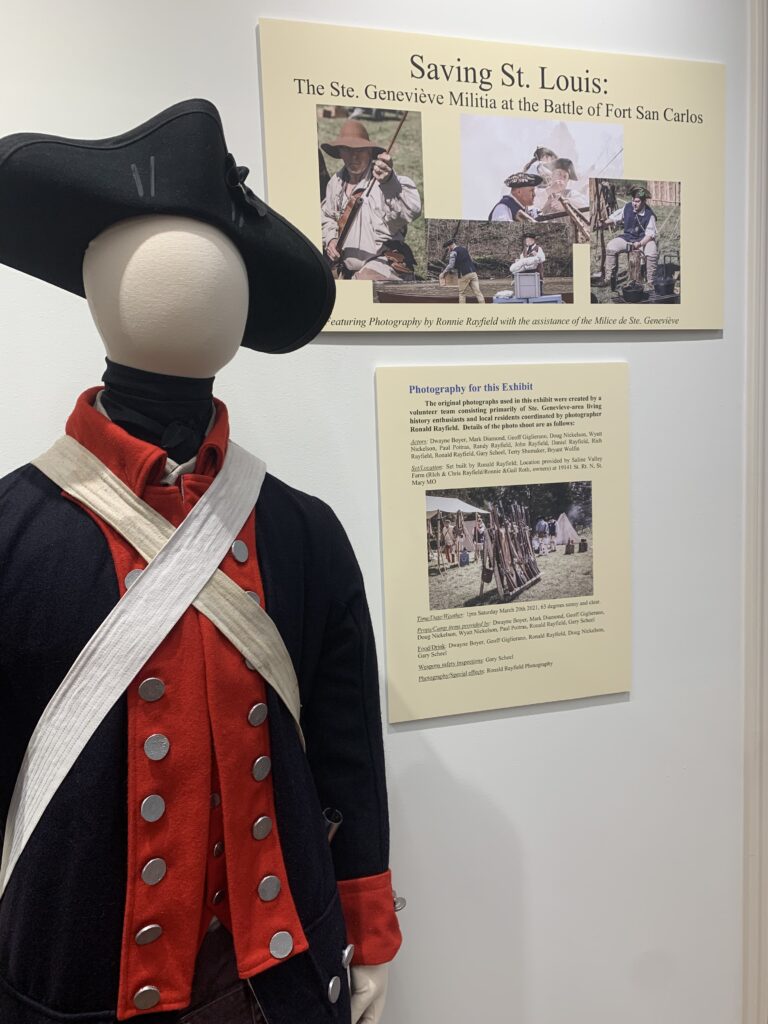 The Centre for French Colonial Life is the headquarters for the French Colonial America museum campus. This building houses temporary and long-term exhibits, the campus gift shop, and offices. Two exhibits are currently on display, Saving St. Louis and Augmenting the Evidence. Saving St. Louis is an exhibit explaining the role of the 60 militiamen from Ste. Genevieve who traveled upstream and were instrumental in thwarting the British attack on May 26, 1780 during the Revolutionary War. The Augmenting the Evidence exhibit features original items used in this region by both French and Native American peoples during the late 18th century.

Comments Off on Centre for French Colonial Life 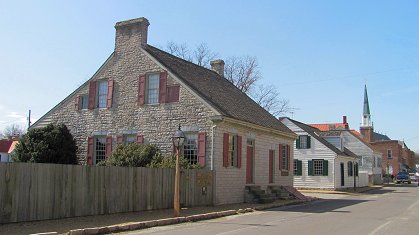 This important Federal style limestone building features an authentically restocked mercantile store of the historic trading firm of Menard and Vallé. Built in 1818, this historic site was the home of one of Ste. Genevieve’s premier colonial families, Felix and Odile Pratte Vallé. The house features the family’s living quarters displaying beautiful early Empire furnishings with fully restored, original mantels and interior trim. An outside staircase on the back porch leads to fully furnished, second floor bedrooms. The charming garden features original brick and frame outbuildings. Special Saturday activities are offered seasonally.
Admission includes guided tours. Meet your guide in the gift shop located across the street. Tours are offered at 10, 11, 1, 2, 3.

The Guibourd-Vallé House was constructed for Jacques Guibourd in 1806 in the poteaux-sur-sole style with vertical, hand-hewn log walls and double-pitched roof. This important National Register site is the only historic house in Ste. Geneviève where visitors can go into the attic to view and study up close the Norman truss architecture employed at the time. The house displays a more refined rendition of the typical French Colonial residence in the era of Lewis and Clark and is finished with elegant French antiques. The museum is owned and operated by the Foundation for Restoration of Ste. Geneviève as a memorial to its donor, Jules Felix Vallé. Admission includes a costumed docent-guided tour. Group tours may be arranged at any time by appointment.

Comments Off on Guibourd-Vallé House 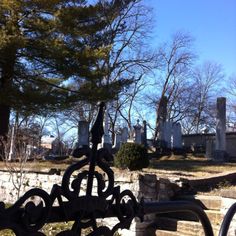 Memorial Cemetery is the final resting place for more than 3,500 people, perhaps up to 5,000. Most grave markers were wooden crosses which have rotted away leaving most graves unmarked. The oldest grave is of Louis Le Clere and is dated 1796. The newest interment, or reinternment, is dated 15 years after the cemetery was officially closed in 1882.

Dr. Lewis Linn was first buried in1843 in Memorial Cemetery, but he did not rest in peace. Because the cemetery had become quite weedy and overgrown, the “model senator” was moved nearby to the new Valle Springs Cemetery. After Memorial Cemetery was cleaned up, in 1938 Senator Linn was buried for the third time. His almost 100-year-old corpse was remarkably preserved in his air-tight, lead-lined coffin, and people lined up to view his face through the window in the lid.

Another burial after the official closure of the cemetery was for Odile Valle. She wished to be buried with her prominent husband, Felix Valle. In exchange she donated land for the new cemetery and an enormous sum for the construction of the new brick Catholic Church.

Other notables buried in the cemetery include John Scott, Missouri’s last territorial representative and first Congressman; Jean Baptiste Vallé, the last French commandant of the area; Jacques Misse, an American Revolutionary War soldier; and a Civil War colonel killed at the Battle of Shiloh.

The oldest part of the cemetery is the middle third. This section was for Catholics. As other faiths came to the territory, another section was added up hill. This is where victims of a steamship explosion are buried, as are Native Americans. Some African slaves are buried there as well, while others lay at peace in their enslaver’s plot. When it became apparent that more room was needed, another parcel was added downhill from the original. Finally, Memorial Cemetery reached capacity and became a health hazard. Burials after May of 1882 were in the new Valle Spring Cemetery for Catholics, the Lutheran Cemetery, and Crestlawn Cemetery for others. 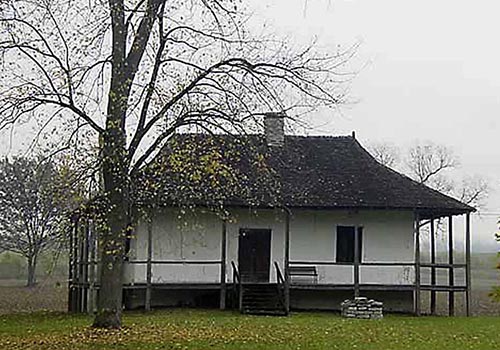 The Bequette-Ribault House, located across from Le Grand Champ or the “Big Field,” was built in 1808. It is a “poteaux-en-terre ”or “posts-in-the-earth” building, referencing its vertical logs built directly into the ground without a foundation. Ste. Genevieve is home to 3 out of 5 remaining such buildings. In one of its restored outbuildings, a Hospitality Center features a tasting bar offering tastings and purchase of Chaumette’s award-winning wines. The Bequette Ribault House was restored by Chaumette’s owners Hank and Jacque Johnson and is usually open for public tours on Saturdays, noon to 5pm, Memorial Day – October, and private tours on Saturdays can be arranged during winter months by calling 573-747-1000. For more info visit our web site: chaumette.com

Comments Off on Bequette-Ribault House
Scroll To Top